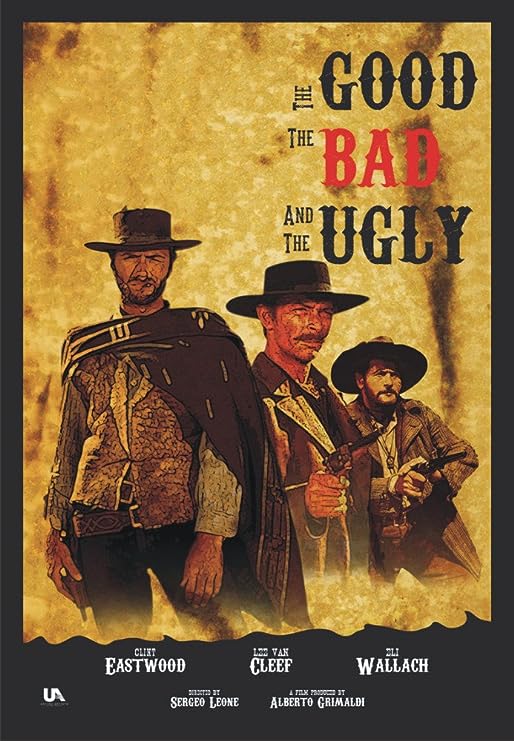 This morning, I finished the “Dollars Trilogy” by Sergio Leone, by watching what is considered one of the best, if not the best, spaghetti Westerns ever made.  An argument could be made that this is the best Western period, spaghetti or not.  While I may not go that far, there is no denying that this is an iconic classic in the world of cinema.

The Man with No Name (Clint Eastwood) returns for the third installment, carrying on a con with his partner Tuco (Eli Wallach), where “Blondie” (what Tuco called him) turns Tuco in for the bounty and then saves him just before he is hanged.

“Blondie” leaves Tuco because he was never going to be worth enough reward for this to be worthwhile, which ticked Tuco off and sent him on the path of revenge.

Meanwhile, Lee Van Cleef, playing a character named Sentenza (or Angel Eyes), and he is in search of a Confederate officer named Bill Carson, who had stolen $200,000 in gold and had buried it away.  Angel Eyes was in search of the gold.

The three of them interact along the way and you never know what each of them may do next.

Early in the film we find out that The Man with No Name is the “good,” Angel Eyes is the “bad” and Tuco was the “ugly” of the triumvirate.  This must be one of the themes of the film because it is hard to classify Eastwood as “good” when he really is no different than either Angel Eyes or Tuco.  The three of these characters are shown as equals in their actions.

The finale of this movie was just tremendous.  It was filled with tension and uncertainty where the three of our characters facing off over the gold.  The filming, the close ups, the music did an amazing job setting the tone of the Western.

I did think the film was a bit too long and there were a few scenes that I think could have been removed to tighten this up.  The whole Civil War part of the film seemed to be tossed in for no reason.  Admittedly, the way the two sides of the Civil War are shown as neither being heroic could fall into that theme I mentioned earlier.

So I was engaged with this movie and it truly was the best of the three.  This trilogy sent the career of Clint Eastwood into the stratosphere.