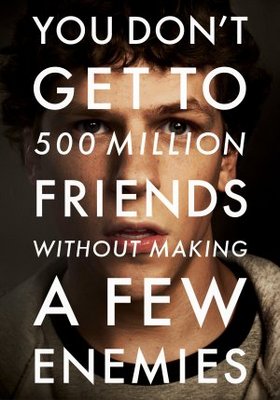 One of the online movie pundits I like made a comparison of The Social Network to Citizen Kane, format-wise.  I made that decision that I wanted to watch them together to see how I felt about that idea.

I had seen The Social Network before, but I had never seen Citizen Kane.  Touching on the idea of the comparison, I do see some connection between the way the story is told with the non-linear storytelling format (though honestly, the flashbacks feel more like the main story than flashbacks), the main protagonist having negative qualities, and Rooney Mara (who played Erica Albright in Social Network) is comparative to Rosebud in Citizen Kane.  There are other connections, but it would take me diving deeper into both movies to really do that analysis justice.

The Social Network is the story of Mark Zuckerberg (Jesse Eisenberg) and the founding of Facebook.  We meet Mark as he is breaking up with the aforementioned Erica (Rooney Mara).  Actually, it was Erica who did the breaking up and it sent Mark on this path toward Facebook.  He went back to his room and started blogging negative things about her, showing his true troll side.  This led to an idea to compare other female students at Harvard.

The comparison website had a huge response and that drew the attention of Cameron and Tyler Winklevoss (both played by Armie Hammer), rowers and legacy students at Harvard.  The brothers approached Zuckerberg with an idea about a social network and they wanted him to write code.  Zuckerberg agreed, taking the idea to another level.

With the monetary investment of his best friend Eduardo (Andrew Garfield), Marc went to town.

Directed by David Fincher, The Social Network just pops with the writing of Aaron Sorkin.  The combination of these talented individuals really provided an amazing product that gave these great actors some fantastic material.  Performances here were just astounding as well.  Jesse Eisenberg, Armie Hammer, Andrew Garfield were all great and it is most likely the best performance in the career of Justin Timberlake.

The film does a great job of showing the character of Mark Zuckerberg and how he was desperate for a connection, yet unable to connect.  The irony of having a person who has so much trouble with the relationships in his life being the driving force behind a platform that is meant to connect to other people is unbelievable.

I did not think originally that this would be a great movie.  I felt that this would be dull, but it is anything but.  I liked it the first time I saw it and this time was even more as I appreciated the technical aspects of the film this time more.  The Social Network is an exceptional film.