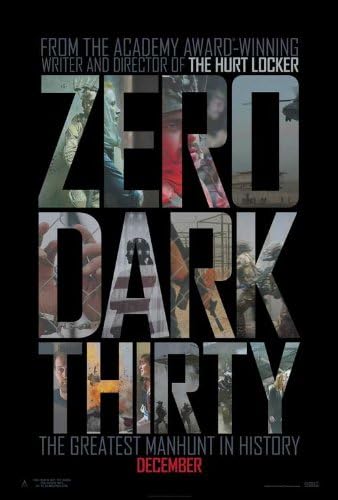 Last week was the Top 10 Show’s list of Female Directed Movies.  This movie was number one on their compiled list.

When I saw it in the theaters, I found it boring.  While I did not hate the film, I did fall asleep several times, only being awaken by the on-screen explosions.

However, the nearly universal praise of the movie, including multiple Oscar nominations and one win, made me wonder if I needed to revisit the film.  There have been several films that, over time, I found more interesting the second time around than I did on original viewing.

This morning I did that rewatch and I found Zero Dark Thirty considerably more compelling this time than I did in the movie theater.

Zero Dark Thirty is the true story of the hunt for and eventual killing of al-Qaeda terrorist leader Osama bin Laden.  We meet Maya (Jessica Chastain), a CIA operative who has arrived in Pakistan and becomes involved with a group using torture to discover details of al-Qaeda plots.  The head agent Dan (Jason Clarke) led the “enhanced interrogation” as Maya was showing signs of being uncomfortable with the techniques.

Eventually, with a change in political administrations on the horizon, Dan began to be beaten down by what he had to do and returned to Washington for a change.  Maya continued her search for information.

In 2011, after breakthroughs, Maya tracked her target to a compound in Pakistan but she could not confirm to a certainty that bin Laden was here.  Despite the doubt in the government, Maya was confident that she was right and he was there.

There is not a ton of action in this movie.  It does drag along at times, especially if you had been expecting this to be an action movie.  It is much more of a character study, if not a psychological thriller than an action movie.  The action here is very realistic and anxious.  The action in Zero Dark Thirty builds the tone of the movie more than it does satisfy the action itch.

The scenes at the beginning of the movie involving torture are the most controversial scenes by far.  They make you feel uncomfortable and show the brutality that went along with the use of them.  However, it did not glorify torture.  In fact, it showed the effects of torture not only on the victims, but also those who were engaging in it.  The first twenty to thirty minutes of this movie weer extremely difficult to watch.

The performances were very strong to fantastic.  Jessica Chastain, very deservingly, received award recognition for her role as Maya.  Jason Clarke was great, taking what many would have written as a one sided character and showed both sides to a complex man.  Kyle Chandler, Harold Perrineau, Chris Pratt, Joel Edgerton, Mark Strong, Edgar Ramirez and James Gandolfini all had roles of significance and provided real moments despite the lack of screen time.

I am glad that I took the time to revisit this movie.  When I approached this with the proper mindset, I found it much more engaging than I did the first time around.  Kathryn Bigelow does a tremendous job as the director of the film.