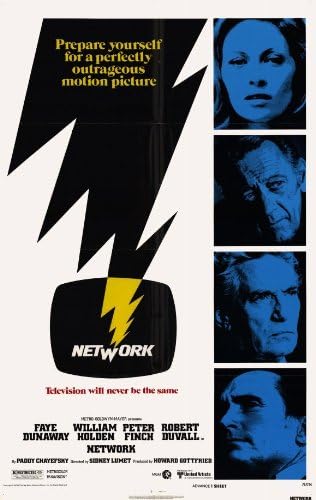 Maybe the news networks should take a closer look at this film.

Network was the story of an aging anchor Howard Beale (Peter Finch) whose ratings had slipped and was going to be fired until he flipped out live on television.  The ratings for his diatribe soared and he became a network standby.

This is still completely relevant in today’s world, especially in the world of 24-hour news networks as we have now.  The ratings are the most important factor.  The networks spend more time with the darkness than in the light.  They try to get viewers to believe/do certain things, mainly to keep tuning in.

Network is full of amazing performances including Oscar winner Finch (who became the first winner to receive an Oscar posthumously).  Faye Dunaway and Beatrice Straight also won Academy Awards for their performances.  William Holden and Ned Beatty were nominated for Oscars.

Directed by the iconic Sidney Lumet, Network won for writing as well.  Everything was brought together in the perfect package at the right time.  The United States had just gone through Watergate and the desire of the public was ripe to respond to such work.

The movie was a satire on the media and the influence of ratings.  It provided some ridiculous situations to show how responses could be just a bad.

News networks such as FOX News, MSNBC etc can easily be seen and recognized in the fictional UBS network in Network.  It makes one wonder why we have not come fartehr.