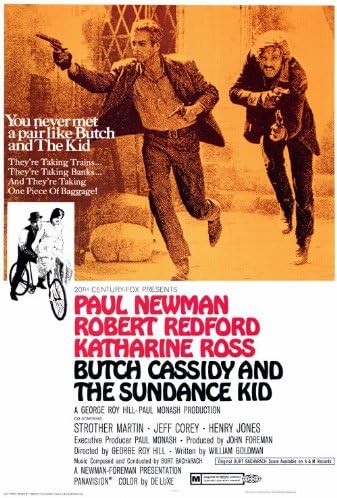 “Who are these guys?”

That was asked several times during the classic Western Butch Cassidy and the Sundance Kid, a film starring Paul Newman and Robert Redford as the titular characters.

Iconic outlaws Butch Cassidy (Paul Newman) and The Sundance Kid (Robert Redford) were leaders of the infamous Hole-in-the-Wall Gang in the Old West.  After a series of train robberies, a seemingly unstoppable posse, hired by the railroad president, comes after Butch and Sundance, chasing the outlaws across the land.  This leads them to flee to Bolivia with Sundance’s girlfriend Etta Place (Katharine Ross).

I really enjoyed this movie.  I am not sure I had seen it before, though I have seen some of the scenes involved here, in particular the iconic cliff jumping scene.  The relationship and banter between Paul Newman and Robert Redford was utterly fantastic and easily the best part of the movie.  They were so quick-witted and engaging that you fall immediately in love with them despite the fact that they were criminals.

The script was written by William Goldman, who would write the book and movie The Princess Bride, and you can see the similarities between the sharp dialogue and the connections between characters.  I laughed out loud several times as Butch and Sundance snipped at each other showing perfect comedic timing in a film that did not make me think would be funny.  Goldman earned an Academy Award for his writing on this project.

The music here is amazing as well.  The happy and bouncy “Raindrops Keep Falling on my Head” works so well in a beautiful scene with Butch taking Etta around on a new-fangled bicycle.

Robert Redford and Paul Newman showed amazing chemistry with each other and totally make this movie work.  Everything depends on these two actors delivering the characters and their dialogue and they are just great.  I had a lot of fun with this movie, as it becomes one of my favorite Westerns around.