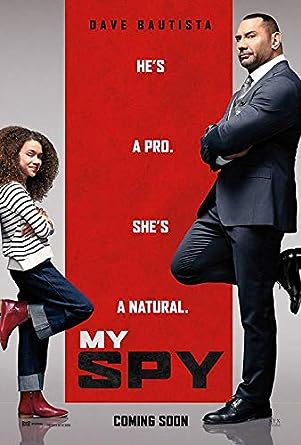 I have been waiting to see this movie for a long time.  Not as long as The New Mutants, mind you, but for a bit.  I had always liked the trailers and so when I heard that Amazon had purchased the rights to the film, I was excited and yet impatiently waiting.

My Spy finally came out on Prime today, and it was about what I thought it would be like.

JJ (Dave Bautista) is a former soldier, now trying to transition into CIA Intelligence.  However, his violent tendencies did not quite work in the situations he was finding himself in.

So JJ and the tech agent Bobbi (Kristen Schaal) are assigned on a surveillance mission of a young nurse Kate (Parisa Fitz-Henley) and her little daughter Sophie (Chloe Coleman) in Chicago, whose uncle is involved in international terrorism.

Sophie is a smart, but lonely little girl and having trouble making any connections as the new kid at school.  She discovers JJ and Kate while they are surveying them.  She blackmails JJ into helping her out of certain situations.

This film is nothing spectacular.  The story and things that happen are basic and predictable.  There are a ton of storyline bits that stretch credibility.

However, I am going to say that I liked the movie.  The main part that I enjoyed was Dave Bautista, who does a fantastic job with this character.  He has a solid comedic timing and he is just likable.  Then, Chloe Coleman does a great job as well.  The relationship and the connection between these two characters are absolutely what gives this movie a pass.  They are funny together.  They have a very natural feel between them even when they are involved in a plot situation that makes little sense.

I have to say that I got some Kindergarten Cop vibe from the film.  Much of the story is very similar to that Schwarzenegger flick.  Dave Bautista carries the film, showing some absolute star quality.

Streaming this, I believe, will make this more successful.  It probably does not work in a theater, but the strengths of the movie come through better online than a lot of other movies.

One thought on “My Spy”