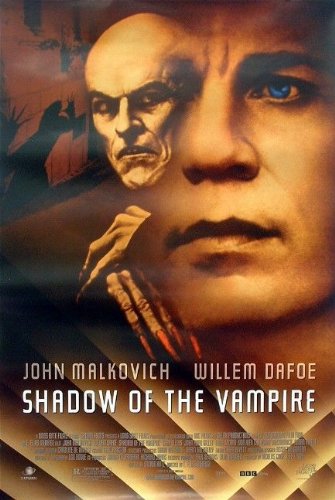 Continuing to reach for October, our October Horror Binge continued today with the fictionalized film about the making of a real film.  The silent film classic Nosferatu is the film that is being used as the historical part of this historical fiction.  Shadow of the Vampire is the fictionalized version asking the question, “What if director F. W. Murnau (John Malkovich) were to use a real vampire as the lead role in his movie?”

Willem Dafoe plays Max Schreck, a real vampire playing the role of Count Orlok.  The cast and crew is told that Schreck is the consummate “method actor” and will only be seen at night and will always stay in character.   Little does the crew know that Murnau had made a deal with the vampire to give him actress Greta Schröder (Catherine McCormack) to feed upon when they were finished.  Murnau insisted that Schreck leave his crew alone and not hurt them, which was a promise that Max could not keep.

There is a lot of humor in the film.  Willem Dafoe gives a remarkable performance as Max and John Malkovich is creepy and cold, wanting only what he wants.  The fact that some people are hurt or in danger in his efforts to create the most realistic vampire movie ever really does not alter his choices.  It makes one wonder exactly which of these men were the monster.

The film is shot beautifully, taking many of the techniques of silent movies, which Nosferatu was, into effect.  The idea behind this is very creative and original.

Defoe was nominated for an Academy Award for Best Supporting Actor for his performance in this movie.  His performance alone is good enough to watch the movie, but there is much more here than just one performance.