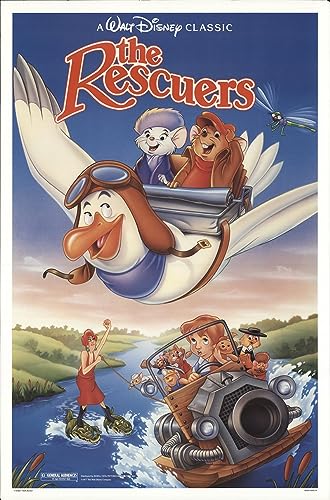 A film that I have not seen since I was very little happened to be on Disney + and was one of the films that I was looking forward to revisiting on the streaming service.

Honestly, there was not a lot of The Rescuers that I remember.  It has been around 40 years since I saw this (if I actually saw it at all).

Bob Newhart and Eva Gabor voiced the main characters Bernard and Miss Bianca, two mice from the Rescue Aid Society, who responded to a help note in a bottle of a little girl named Penny (Michelle Stacy) who had been kidnapped from out of the orphanage she lived in.  The girl had been taken by the villainous Madame Medusa (Geraldine Page) and her companion Mr. Snoops (Joe Flynn) to force her to find the diamond that Madame Medusa has been searching for for years.

The story of The Rescuers is pretty simple.  There were things that I thought could have been developed more, such as the fact that Bernard was just a janitor and not an actual agent, but that fact did not seem to ever really come up in any significant manner.  There are plenty of examples like this scattered throughout The Rescuers.  Truthfully, these potential plot points would have cluttered this up too much.

The fact is this is a simple good vs. evil story, with one of the more cruel villains in Madame Medusa.  The design of the character in the animation reminded me quite a bit of Carol Burnett’s portrayal of Miss Hannigan from the Annie movie.

There was a very intense chase scene with a mosquito being chased by a bunch of bats that was excellent, which was something that I never thought I would type.

The music was nice, but not memorable. There are some scenes and moments that were pretty dark for a Disney film.  Especially the healing power of moonshine alcohol.

The Rescuers was a quick watch and was a fun animated movie.  It is not a very deep story, but as a light and fluffy film, it is pretty good.  There are some scary scenes, but they help create tension for the viewer.