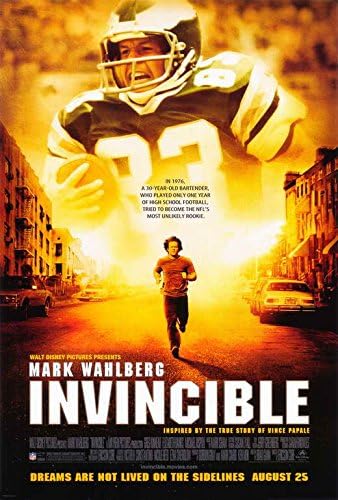 The second football film today is Mark Wahlberg’s role as 30-year old bartender Vince Papale who tried out for a position on the Philadelphia Eagles.  This true story took place in 1976,

Greg Kinnear plays NFL coach Dick Vermeil, the man who gives Papale his chance to make the team and stuck with him against the backlash.

The film is fairly by-the-numbers but it tells a great story of perseverance and grit.  How if you give your best effort and stay on target, you can accomplish your goals.

Yes, there are the typical sport movie cliches here.  Most of them do.  I would give a true story a little bit of leeway compared to a fictional one.

Wahlberg is good in the movie and Kinnear continues to do solid work.

While there is nothing that really stands out in Invincible, the power of the true story comes through above everything else.  It is worth the watch.