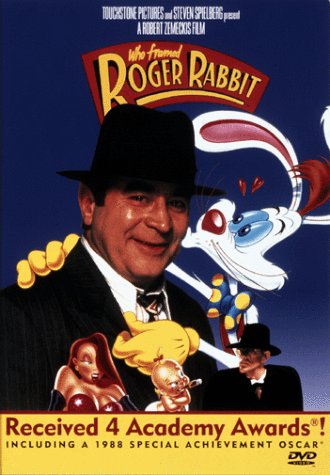 “I’m not bad, I was just drawn that way” -Jessica Rabbit.

Who Framed Roger Rabbit is arguably the best part-animation/part-live action movie of all time.  The combination of the animated characters and items with the living actors is done in a nearly perfect way.

Private Detective Eddie Valiant (Bob Hoskins), who has been drinking heavily since a mysterious toon killed his brother, gets involved in a strange case with the fate of Toon Town in its grasp.  The hectic toon Roger Rabbit (Charles Fleischer) is charged for murder and the rabbit teamed up with Valiant to try and solve the mystery.  Roger is chased by the ominous Judge Doom (Christopher Lloyd) and his pack of toon hyenas who are looking to dunk Roger into the Toon-killing Dip.

Told as a detective noir story, Who Framed Roger Rabbit is a cool, clever story with an amazing pay off.  The character of Roger Rabbit is iconic and his wife, Jessica Rabbit (Kathleen Turner), is an amazing combo of toon and the classic “dame” from the old time noir films.

Bob Haskins is brilliant in this movie.  His performance is utterly wonderful.  His character has a devastating story arc, from the alcoholic detective in grief over his brother’s murder to the detective who embraces his past to survive his future.  You feel for Haskins and understand why he is as gruff as he is.  He has great chemistry with Roger Rabbit and with his girlfriend Dolores (Joanna Cassidy).

In what you would think was a family movie, there are scenes in this movie that are simply frightening.  There is a scene early in the movie where Judge Doom “dips” a toon shoe that is absolutely tense and filled with terror.  Then, the third act of this movie is extremely dark and suspenseful.  The conclusion of this movie is one of the best third acts around as everything comes together in a blend of perfection.

There are amazing cameos from some of the greatest cartoon characters ever on screen, together for the only time.  We see Mickey Mouse and Bugs Bunny sharing a scene.  Betty Boop interacts with Eddie Valiant.  There is a piano battle between Donald Duck and Daffy Duck.  The combo of Disney animated characters and Warner Brothers animated characters is something you aren’t going to see anywhere else.

Robert Zemeckis directed this film and it is one of his best on his resume.  The film won four Academy Awards for the technical marvel of the ability to present animated characters as if they are 3D people.  It truly does hold up too, despite the fact that the technology has improved.  This is a technical wonder.

Who Framed Roger Rabbit is a masterpiece.