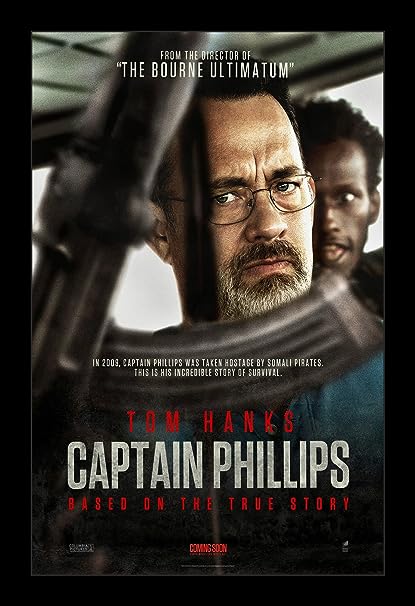 This was one of my favorite movies from 2013.  In fact, looking back at the top 15 list from that year, Captain Phillips was number one.

Captain Richard Phillips (Tom Hanks), captain of the U.S. container ship Maersk Alabama, and, in 2009, his ship was hijacked by Somali pirates, led by a young man named Muse (Barkhad Abdi).  Phillips is then taken hostage on the ship’s lifeboat as the pirates try desperately to return to Somalia.

Tom Hanks is masterful in this performance, a performance sadly ignored by the Academy voters, and shows every range of the spectrum of emotion.  He goes from fear to anger to frustration.

Yet, the final 5 minutes of screen time for Tom Hanks, when Captain Phillips is safe and be examined on the navy ship, may be the greatest piece of acting I have ever seen.  Phillips is in shock and Hanks completely delivers that feel.  It is heartbreaking, completely raw and as powerful as you could imagine.

This is based on a true story and just watching the anguish and total uncertainty Captain Phillips is amazing at the resiliency of the human spirit.

However, the film does not just focus on Captain Phillip’s strength, but the emotions of Muse and his own fears and anxieties connected to what he was trying to accomplish.  He was desperate in his own way and reacted in a different way.  For much of the movie, there was almost like a chess game going on with Phillips and Muse.

The film is utterly tense and keeps your stomach churning, as if you were actually on the water.  I loved Captain Phillips when I saw it in 2013, and I loved it about as much this time through.