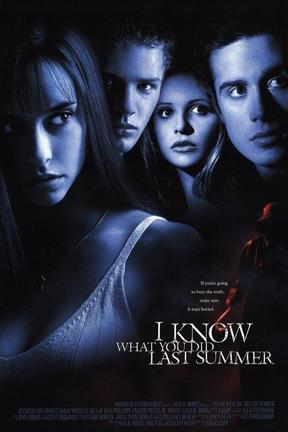 The last of the Second Chance/First Impression Binge this weekend before the football game is from the creators of Scream.  I Know What You Did Las Summer takes the tropes of the slasher movie and the kids in jeopardy and makes a movie that I saw once and did not remember much about.

I knew that Buffy the Vampire Slayer was in it (aka Sarah Michelle Geller) and her future husband Freddie Prinze, Jr.  I found it hard to see Sarah running from this fisherman with a hook character as I kept wanting her to turn to him as Buffy and kick his ass.  Unfortunately, that was not to be.

Four kids, out for a summer night of drinking and sex on the beach, wind up running down a man on their way home.  Instead of calling the police, they decide to dispose of the body and pretend like it never happened.

Of course, that kind of secret has a way of coming back, but not usually in the form of a psychotic fisherman looking for revenge.

There are some big old plot holes in the story and the fisherman sure seemed to be able to be anywhere in a flash of a second.  Plus, Barry (Ryan Phillippe), the football kid and boyfriend of Buffy, was a real dick.  As an entitled rich kid, you almost did not mind the fisherman chopping him up for chum.

The film is pretty fun at times watching these four pretty people suffer for their crime while hoping that, at least some of them, make it out alive.  It overcome most of the problems to give us a poor man’s Scream.

The biggest issue I had was “how did the killer get around, get those bodies out of there so quickly and efficiently, and still be in the right place at the right time?”  It was a major distraction and made the killer seem supernatural even though, spoilers, he wasn’t.

Still, it is not the worst film I have seen in the genre and it provided some dumb fun.